St Pierre has been away from the sport for just shy of four years. Having stepped away following yet another successful title defence against Johny Hendricks. 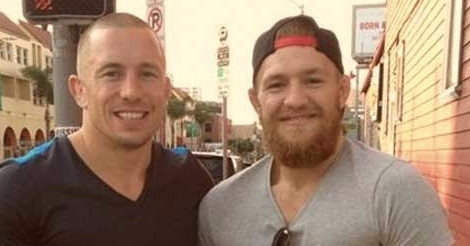 Now the former poster boy of the UFC looks to claim yet another scalp in the former of the current champion Michael Bisping. Having added significant bulk to his frame, St Pierre believes that his combination of skills and fight IQ will be enough to dethrone the Brit.

A Conor McGregor Superfight On The Horizon?

Duffy however, like others in his team see another potential super fight on the horizon which makes a tonne of sense. With a win over Bisping, a matchup against the current lightweight superstar Conor McGregor would be the fight to make. Speaking with Sunsport, Duffy commented,

“It’s a huge fight — two of the biggest pay-per-view sellers. I’m sure that it’s the kind of fight that Conor wants to be involved in, that’s going to really push his legacy. And Georges is interested in the same thing. It makes a lot of sense,”

With St Pierre, you have the former undisputed PPV king. And with McGregor, you have the current undisputed draw in the sport. On paper it makes perfect sense, so we have no doubt that the UFC top brass will be eyeing up the potential windfall, should St Pierre get the win at UFC 217.

Duffy himself has his own test ahead facing the much taller opponent in the 6ft 3″ Vick. So Irish eyes will be focused on MSG NYC come November 4th. All be it for different reasons. Best of luck to Duffy in his quest.