Conor McGregor vs The World

Conor McGregor has received a negative backlash from many MMA fans following his performance at the recent UFC Go Big event. I have to admit that, at some points, I was a little embarrassed. But once again once the heat had died down I think he has done an admirable job at promoting not only himself but his employer and fellow fighters.

Conor rarely had the mic out of his hand As soon as it came to the time for journalists to proffer their questions. Duffy, Cerrone, Mendes, Aldo, Edgar, Dos Anjos all got some. Even the welterweights weren’t left alone, and as if to punctuate it all he also said:

Many of the people sharing the stage with him were pissed. I can understand why: they’re taking personal attacks in public. It’s not a nice thing to have to go through, especially when they’ve done nothing wrong per se. But can’t they see what he was doing for them?

Can’t the fans understand what foundations Conor was laying for the next two years for up to three divisions in the promotion? I felt bad for those who were flailing for words, but Conor McGregor has potentially earned them a mint. Break out the red panties indeed! 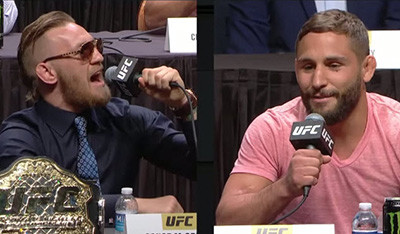 One of the most telling things in the event was the way Cowboy Cerrone handled the situation. There was some ying-yang stuff going on there. He joined in with gusto and I loved that line about beating the Lucky Charms out of Conor.

He also called Conor English, which I guess is one way to try to inflame an Irishman with nationalistic leanings, as Conor has. But then Cowboy let something slip. It conveyed that not only was Cowboy genuinely annoyed. But revealed something that says more about how Conor handles his business than anything else we have seen so far. He intimated that he was standing beside Conor for 30 minutes, as were many fighters, and that backstage Conor was quiet as a mouse. He had nothing to say to them then.

It’s amazing that Conor can just suddenly switch into his promotional persona as soon as he knows the world is watching. What is equally amazing to me, though, is that Cowboy did not seem to realise (at the time) what Conor was doing, and got genuinely angry.

I’m glad so many fighters joined in attacking Conor, but not so happy that they were obviously distressed while doing so. However, it just means more emotion invested by the fans for these potential upcoming fights. At one stage, Dana White seemed to have a quick word with him between flows. Most are supposing he was asking him to cool his jets. But why not think it was saying “Keep going, dude!”?

Conor now has six fights lined up for himself as a result of Go Big. In fact, you could argue he was the only one on stage to ‘Go Big’! (Although I was also impressed by Holly Holm’s measured responses to her questions).

Chill, guys. This is a sport, yes, and a technical one, but it’s also the prize-fighting game. Always be switched on during promotional events. The more bums on seats, the more cash will be available to line your pockets. Relax, and let Conor do his bit for the equitable distribution of wealth!

You can watch it here<< The real fun starts 37 minutes in!