The title of this article is a bit tongue in cheek, but it’s also quite true. As yesterday the challenger Conor McGregor and featherweight champion Jose Aldo Junior kicked off their UFC 189 World tour in Rio De Janeiro. All eyes and ears were on the man who is contesting and not holding the belt, The Notorious one.

Jammed into an Irish boozer, just a few days shy of St Patrick’s. McGregor found himself in the eye of the storm, the belly of the beast. In the home country of his opponent and long time defending champion Jose Aldo. And in typical fashion the man from Ireland rose to the occasion, playing to those in attendance and embracing both the positive and negative feedback the crowd had to offer.

With shirtless photo ops, Aldo’s image being used for target practice. Then subsequently and ceremoniously being ripped in two. Shenanigans Irish bar in the heart of the capital became the staging post for the first leg of what’s sure to be, if nothing else, an extremely entertaining series of media events in the build-up to UFC 189. 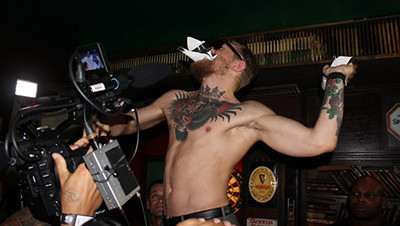 With proceedings having gotten off to a somewhat shaky start as his luggage went missing. Wearing a mishmash of clothes he acquired from several sources.

McGregor was in full effect as he answered a question on how he felt he was viewed by the Brazilian people… “Like a King” he replied. While leaving the media in attendance in no doubt who he believes will be taking the featherweight belt home when the two finally meet.

With the UFC’s promotional machine already in overdrive. There is a serious push being put behind the July showdown between the two featherweights. It’s anyone’s guess how big the actual event will become fight night. But if this first leg is anything to go by. The Conor McGregor hyping machine is sure to have fans of both fighters worked into a frenzy and chomping a the bit to buy those pay per views.

With a further series of media days between now and the end of this month. Covering several cities in the US, Canada and UK. All culminating at a final event in the home town of the challenger… and not the champion, it might be added!

Like it or not, let there be no doubt that this is very much the Conor McGregor show. The UFC knows it, the fans know it and even the champ himself must realise it? And come July 11th in Las Vegas Nevada, a whole 4 months from now. How the final act plays out, will be all that’s left to be decided.