Conor McGregor: Business of Fighting Taking Over the Sport

Another week has gone by and the business of fighting has taken over the sport of fighting. There has never been a time where the act of fighting your way up the ladder to the title has been less important. The sport of MMA is still ruled by the man from Crumlin who talks everyone into their seats and following that up with being an elite fighter. But would Conor McGregor have all of the success if he wasn’t as good of a fighter?

For me, if it is a real sport. As in you win to progress or lose to drop down the pecking order. Then he is a top 4 fighter in 3 divisions. Champ at 145 lbs and a top contender in 155 and 170. But he might not necessarily be the top dog in each division, the business aspect takes over and keeps him at the top.

McGregor took Dublin over to the UFC, there are parts of pro wrestling in there, part of the greatest characters in pro boxing there as well as the Dublin charm that we all have, but don’t expose on such a high level. The Americans have eaten it up. The rest of us have applauded (for the most part) that one of our own has taken our ‘way’ over to the biggest fight organisation in the world and become one of the biggest sports stars in the world right now.

The reason this has happened is mostly business. Conor and his team understood how to get someone to get off their couch and attend the fight, or to order the fight for far too much money. It is the marmite principle. People either love him or hate him. This is pure pro wrestling. That is how you draw money in that field.

Business is Business and So Is Sport

Obviously I am not comparing both like sports, just like businesses. The reason why wrestling is not at its highest in terms of popularity is that no one does what Conor does. They are too scared to let their audience make a decision. The UFC is happy to put Conor (and Chael before him) out and let the audience make their mind up. 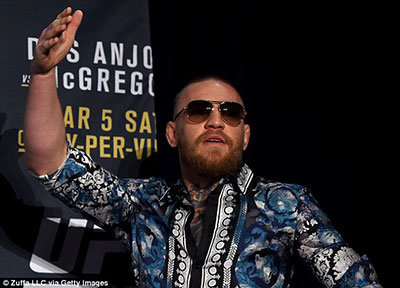 Conor lays it on thick and the difference he is bringing is that there are people turning on him, but what they don’t understand is that this was part of the plan. The gimmick he plays is so good that people who should know better are caught by it.

His team understand that people will turn against him eventually, and let’s face it, we Irish always turn on our sportspeople who do well. The only one we haven’t turned on is Katie Taylor, and that might be because she didn’t turn pro and stayed an amateur. If she was signed by golden boy promotions and moved away to train, we would turn on her too.

So back to my initial point, the business plan is more important than the wins and losses. Case in point. If the McGregor v Diaz was a pure sporting occasion, then Nate Diaz fights Dos Anjos (the fight that Conor McGregor was supposed to have). That fight is minimal in terms of interest in the casual fan base.

The Big Money Is In The Diaz vs McGregor Rematch

And I am sorry to burst your bubble but the UFC already have our money, it’s the casual money they want. So that money is in a rematch. There are a lot of excuses as to why the fight went the way it did, a lot of them are fully justified, but if Diaz beat anyone else that way, there would be no clamour for a rematch. The reason is money and business.

I don’t know how I feel about this. For me, sport should be sport and the best fighters are the ones who beat the best and have the most interest from the fans. But it looks like it’s only the second part of that means anything.
The rematch is on. I hope it is at 155, but the rumour is that it is 170. Diaz with a full training camp and the knowledge that the cheque for winning the second time around is multiples of the one he got for the first fight makes him tough to bet against. But the heart stays with McGregor. Imagine what happens if / when he gets the win in the second fight.

It would be a massive comeback story, and nothing makes more money than a comeback!

@nkeegan for the usual debate and punditry
Until next time…