The focus leading up to the UFC Fight Night Boston card has been all about one man, Conor McGregor. Going into his fight against the German Dennis Siver, it’s hard to recall any fighter, perhaps in UFC history getting more air time than the Notorious one.

For the most part, Siver is the forgotten man in this battle, being offered up as a sacrificial lamb to be slaughtered for the viewing pleasure of the masses. A mere stepping stone on the way to the title shot for McGregor, just another fallen forgotten adversary along the path. 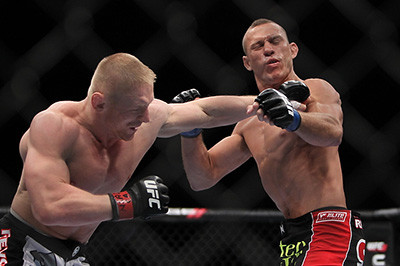 Bar the odd jab about Nazi’s and steroids, Siver has managed to weather the now-familiar verbal onslaught quite well. With the veteran kickboxer seemingly having not become too wrapped up in the hysteria surrounding this huge Boston card.

Siver has been either unable or unwilling to verbally joust with the man from SBG. Instead of focusing very much on himself and going about his business in a typically understated, well, German fashion.

Even with all the trimmings including the overly zealous, rumbustious drunken Irish mob who have made the journey and the American Irish contingent, raising the roof of the TD Garden arena. UFC Dublin 2.0 as some have renamed the event, although upgraded in sheer scale. It may be nigh on impossible to replicate the fun and ferociousness of that now-infamous Summers night in Dublin. With all that being said, there is no doubt that this will be yet and special event on the packed UFC calendar.

How will Siver react when stepping into what is sure to be a brimming cauldron of sound and colour, green white and gold to be exact? With a crowd heavily favouring their Irish son. It may take all of Siver’s years of experience to shut out the McGregor faithful and focus on the job at hand.

Knockout Of The Year

Currently, a top ten competitor, Dennis Siver has been a professional MMA fighter for a decade. At 36, his career is in its latter years. But there’s still fight left in this dog…

With 18 fights in the UFC, winning Fight of the Night four times, Knockout of the Night twice and a Submission of the Night. He has the potential to do damage if given the opportunity. And only losing in recent times to Ross Pearson, Donald Cerrone & Cub Swanson. Pearson and Cerrone at lightweight, then Cub at Feather!

Can Siver conjure up something special and put the brakes on the Conor McGregor hype train? Well, he seems to think so, as in his own words he forcefully commented that;

“Conor is looking for an easy fight and an easy win, I will take his title shot from him. I will put the world on notice that Dennis Siver is nobodies stepping stone”.

What will happen is anyone’s guess, it always is. But we know what the majority of the fans say, the pundits, the bookies. Even those who don’t follow the sport, but may have briefly glanced over something in the daily tabloid. “Mcgregor should win this one easy”. Get the champagne ready, hell uncork it now, in all certainty of a victory. But just don’t pour it yet..let’s wait and see what this Siver guy has got first. You’d never know.. in this sport anything can happen!