Conor McGregor has provided us with it all during his time in the UFC. Wins, Losses, world tours, comedy, broken records and even a water bottle infused mini-riot with the Diaz brothers.

What more could we ask for, it’s been good, heck, it’s been great. But for everything he has already achieved, his next chapter potentially casts a slight shadow of irrelevance over it all.

Ireland’s favourite son is now heavily tipped to finally make the move to the lightweight division, the division he was always destined to settle at. And what lays in wait for him is a posse of hungry world-class menacing savages.

The first of which ranks above them all, UFC lightweight champion Eddie Alvarez. The two are hoping to slug it out for the gold in what promises to be a memorable and monumental UFC 205 in Madison Square Garden.

It will the first event in the city so good they named it twice since common sense prevailed and their MMA ban was lifted back in April of this year. Who else really could headline such an event but the notorious one. 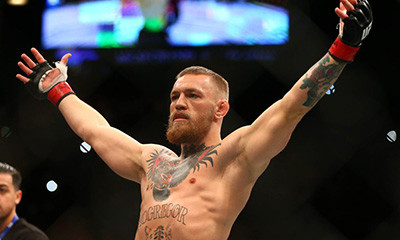 Everyone knows his story. Taking out anyone with any relevance in the featherweight division before finishing José Aldo with a thunderous left hand in only 13 seconds to claim the title.

The stage was then set for McGregor to move up and take on the then lightweight champion, another Brazilian, Rafael dos Anjos.

Dos Anjos was looking ferocious, riding a five-fight win streak that included completely dominating Anthony Pettis to claim the title. He then went on to destroy the heavily touted Donald ‘Cowboy’ Cerrone in one round.

So what we had here was a genuine super fight. A fight that would undoubtedly split opinion all across the MMA community, with logical arguments available on both sides of the fence. But as we all know tragedy struck and dos Anjos was pronounced injured and unable to compete. This news set off an unbelievable barrage of chaotic matchmaking from MMA fans around the world.

I didn’t really care who Conor was matched against, but felt a number one contender fight while we wait on dos Anjos to heal was the logical option.

The UFC had bigger plans and decided to cash in on the potential fireworks a Nate Diaz vs Conor McGregor show should be. And low and behold, it didn’t disappoint. The only real disappointment for me is the fact they had it at welterweight. I get the fact that Diaz was coming in on short notice, and McGregor’s confidence would have helped Diaz’ negotiations on that point.

But from a productive point of view, the fight had an exhibition edge to it. Neither fighter was going to lose or gain anything significant in a title picture. Anyway, his UFC lightweight debut to my regret would be delayed. Oh, and then again when Diaz decided to go Jiu-Jitsu on McGregor’s ass and choke him out.

So we had to do the whole thing over again, exactly how Conor McGregor wanted it. The fact that you’re even reading this article tells me we obviously don’t need to go into that.

Don’t get me wrong, it was fun, exciting, and two great fights, but it’s back to business now. And while many believe that business should be the featherweight title defence rematch with José Aldo, I think different. No disrespect to Aldo, he is one of the greatest champions the world has ever seen and undoubtedly deserves his rematch.

But let’s face it, I make McGregor a heavy favourite in that fight just like I did in the first, and that’s largely down to his size and power in that division.

The lightweight division is the place to be and it’s the place where McGregor will earn respect in the UFC. There are few men ranked in that division that haven’t remarked on how the Irish man would be ‘found out’ moving up in weight. Alvarez even claims all his sparring partners are more talented than the featherweight champion.

That’s interesting, and heavy praise indeed if you’re doing some rounds with Eddie Alvarez these days. But I’d doubt the Philadelphia man truly believes that, and that’s all just an attempt to gain an edge with some psychological warfare perhaps.

As well as being a master at it, Conor seems to be a tough old nut to crack when it comes to the mind games. Nate Diaz did have some success in that respect but he too is a seasoned veteran, having been flicking the bird in opponents’ face for the best part of a decade now.

But it’s inside the octagon where the real business is done and that’s where I feel the clarity will be shed in the career of Conor McGregor. He must be applauded for quickly realising his errors in the first Diaz fight and going back to the drawing board and making the correct adjustments to get the job done the second time around.

Taking on The UFC Lightweights

These lightweights won’t go down as easy as the featherweights did. And I’m pretty sure his fights with Diaz will have helped him come to terms with that.

Ironically, even though the Diaz saga postponed his eventual arrival to the division, I feel he is better prepared now having gone through that. Conor will have to evolve to compete at this weight efficiently, a process I’m sure that has already begun. I expect a less direct version, more prepared to fight on the back foot with counter combinations, making that left hand still a very dangerous weapon in his arsenal.

This Alvarez fight should be fascinating, and win lose or draw McGregor is in the lightweight ranks to stay. Meaning plenty more stylistically fascinating match-ups down the line.