CLAUDIA GADELHA and KAROLINA KOWALKIEWICZ at he very top

For over two years now, Joanna Jedrzejczyk has been ruling over the UFC Strawweight division as the dominant champion. The once brand new division had previously been a whirlwind of contenders. Almost all of which entered the Ultimate Fighter house to crown the inaugural UFC champion. The hardcore MMA fans were likely aware of most of the world’s best 115 lb females.

But the reality show represented a good chance to introduce those talents to the wider UFC audience. As well as providing the tournament format to crown the first belt holder. The season featured women such as now contenders Rose Namajunas and Tecia Torres.

As well as the eventual first champion Carla Esparza. However, the aforementioned Jedrzejczyk wasn’t featured and nor were Claudia Gadelha and Karolina Kowalkiewicz. 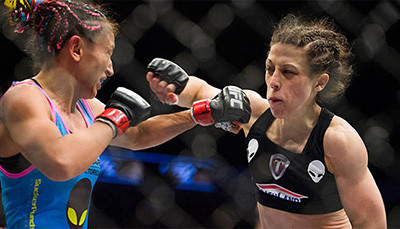 After becoming the first-ever Strawweight champion, Carla Esparza’s reign would come to a quick end.

Just three months following her coronation, the ‘Cookie Monster’s first defence came against Jedrzejczyk and the Polish striker was dominant.

Battering the champion around the octagon en route to a merciful 2nd round stoppage.

In an instant, the whole division had been dramatically altered and a new champion had already been crowned. Joanna’s dominance was telling though and people immediately began to revisit her prior wins. Especially the fight that had earned her the title shot in the first place.

It was a split decision victory over Claudia Gadelha, a win that took the Brazilian’s undefeated record from her.

Though the new champion Jedrzejczyk was 9-0, that Gadelha clash wasn’t without its drama. In fact, many felt that even though Joanna had scored a knockdown, she was fortunate to come out the decision victor. Gadelha’s physicality and grappling prowess had caused the striker issues and in the minds of many, earned her the win.

Nonetheless, the judges disagreed and just three months later, Jedrzejczyk was the new champion. Before Gadelha could re-enter the octagon though, Jedrzejczyk would successfully defend the title for the first time. 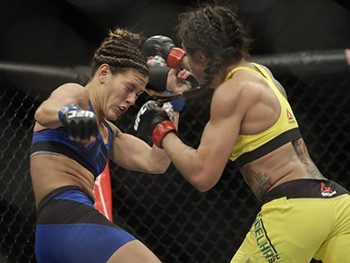 Though the very solid win came on a FOX main card, Kowalkiewicz’s debut still probably flew somewhat under the radar. Regardless, Jedrzejczyk would indeed successfully defend her belt against Letourneau. Setting up the rematch with Gadelha.

First though, the rivals would coach opposite each other on a season of The Ultimate Fighter. In the meantime, Kowalkiewicz would make it two straight wins inside the octagon, dominating Heather Jo Clark to take a decision victory.

Animosity and hype quickly built as Jedrzejczyk and Gadelha repeatedly clashed heads in the reality show format before their eventual fight in July 2016.

The disdain between the athletes translated to drama inside the cage too. With Gadelha jumping on the champion and even dropping her with a jab early. That wasn’t Gadelha’s only success either, she was also able to score takedowns and was very much competitive on the feet.

However, Claudia Gadelha was pushing a pace she simply couldn’t sustain and eventually faded as the fight approached the championship rounds. Jedrzejczyk thrived as Gadelha tired too, soon battering the challenger with sharp shots at range. After a wild and competitive start, Jedrzejczyk pulled away and came out the clear unanimous decision winner. 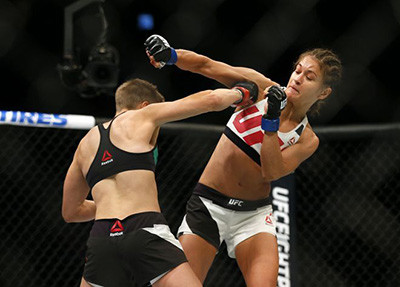 Gadelha was spirited and showed a lot of skill in defeat but with two losses to the champion, was now at the back of the line.

New challengers were needed and with that emerged a fight between Rose Namajunas and Kowalkiewicz for number one contender status.

Namajunas had strung together three wins since losing to Esparza in The Ultimate Fighter finale and though still new,  Kowalkiewicz was one of the division’s few undefeated contenders.

The fight would highlight Kowalkiewicz’s unique ability to dictate action inside the clinch as she began to land hard knees and elbows in the 2nd round.

The damage done was simply too much for Namajunas to overcome in the deciding 3rd round and Kowalkiewicz ended up the split decision winner.

The impressive result elevated her credibility tremendously and solidified her spot as the number one contender. Three months later and Kowalkiewicz would get that opportunity. Fighting Jedrzejczyk in an all-Polish clash at UFC 205.

The challenger wouldn’t be without success either, even legitimately stunning Joanna with a hard right hand in the fourth round. Jedrzejczyk recovered though and overall, her striking range was too much for as she dictated much of the action to take a unanimous decision victory.

One week later, Gadelha rebounded from her prior loss, defeating Cortney Casey on points. The positive of a champion as dominant as Jedrzejczyk is it often makes the totem pole very clear. For as talented as Rose Namajunas is, it’s hard to argue that Gadelha and Kowalkiewicz currently occupy the spots of 2nd and 3rd in the rankings.

That’s what makes their fight against each other this Saturday at UFC 212 all the more interesting. The two women certainly have similarities considering that they have both only been beaten by Jedrzejczyk and their styles look set to gel perfectly.

Unlike Gadelha though, Kowalkiewicz’s loss wasn’t due to a lack of stamina but instead. Her striking game simply wasn’t quite as developed as the champions.

On the other hand, though, Gadelha arguably had much more success in her two encounters with Joanna. But she’ll need a special performance here to get a third shot. A win is pretty vital for Kowalkiewicz too though and that’s what makes Saturday’s ‘best of the rest’ clash all the more intriguing.