Off the back of the most recent season of The Ultimate Fighter, a fierce rivalry between two camps in the sport of MMA is as high in the Mixed Martial Arts consciousness as it has been for some time.

The bad blood between American Top Team and The Blackzilians upon the formation of Glenn Robinson’s Boca Raton based gym formed the concept for TUF 21. Disputes and alleged betrayals between Robinson, ATT co-founder Dan Lambert and long time American Top Team stalwarts Danilo and Yuri Villefort. Jorge Santiago and ‘JZ’ Cavalcante have been turning MMA publications into Hello Magazine.

Add in some rumours of illicit deals, Robinson’s newest client Rashad Evans needing a new home after his high profile split from Greg Jackson. And a host of big names such as Tyrone Spong and Vitor Belfort and you have a real MMA soap opera.

However, team rivalry is actually a far older phenomenon than today’s narrative would have you believe. In a bygone era. Brazil’s finest talent was going head to head all over the globe battling not only for themselves. But also for the supremacy of their relative teams; in Rio De Janeiro, Brazilian Top Team, and in Curitiba, Chute Boxe.

Founded as a Muay Thai camp in the late 1970s by team patriarch Rudimar Fedrigo, Chute Boxe expanded into Brazilian Jiu-Jitsu. And subsequently Mixed Martial Arts in the early 90s. With prominent trainers such as Jose ‘Pele’ Landi-Jons and a young Rafael Cordeiro. Chute Boxe was notorious for the ‘berserker’ style a majority of their top stars were known for.

Though fighters from the two camps competed all across the world, including in their own shows. The rivalry grew exponentially under the banner of the iconic, and now defunct, Pride Fighting Championships.

Japan and Brazil have a long and storied martial arts brotherhood, and the links between the two countries have been essential in the creation and expansion of Mixed Martial Arts. From Maeda teaching Carlos and Helio Gracie, all the way through to Rickson selling out the Tokyo Dome at the inaugural Pride event in 1994.

An icon of the glory days of Pride Fighting Championships, the come-forward, aggressive philosophy of was best illustrated by Chute Boxe’s prized asset. Wanderlei Silva. ‘The Axe Murderer’ was the star attraction during the heyday of the legendary Japanese promotion.

His win in 2003, coupled with his fight of the year victory over the same man a year later. Made Wanderlei one of the hottest talents in the sport of MMA.

Silva’s destructive reign atop the division began in the year 2000, with victories over Guy Mezger, Dan Henderson and a hat trick of stoppages over Kazushi Sakuraba. Encompassing an 18 fight undefeated streak. Eventually snapped in a Heavyweight war with Mark Hunt on the 2004 New Years show.

Despite that loss, Wanderlei would enter the 2005 Pride Middleweight Grand Prix as a heavy favourite. Regardless of the presence of one of Brazilian Top Team’s stalwarts, Ricardo Arona. 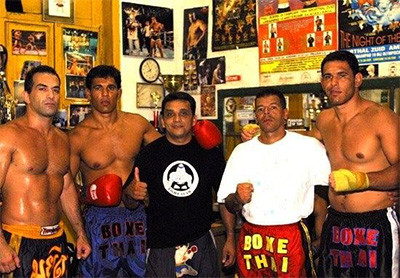 Hosting such names as Arona, Vitor Belfort and the Nogueira brothers, the infamous Rio fight camp was home to some of the most revered names of the era. Big Nog wore the inaugural Heavyweight title. Whilst his brother, along with Belfort, Allan Goes and Mario Sperry competed in showcase bouts for the promotion.

The rivalry looked set to come to a head in the 2005 Pride Middleweight Grand Prix. Representing Brazilian Top Team was Ricardo Arona, whilst Wanderlei Silva entered as a heavy favourite.

The two would meet in the semi-finals, and despite impressive wins over Kazushi Sakuraba and Dean Lister, Arona’s win stunned the MMA world. It seemed to signal a shift in the balance of power towards the Brazilian Top Team, but in the final round, Chute Boxe’s new young star would rise.

Mauricio ‘Shogun’ Rua was on a charge, having knocked out Quinton Jackson and decisioned BTT’s Antonio Rogerio Noguiera prior to the finals. On the night, immediately following Arona’s 15 minute battle with Wanderlei, Rua would knock out Alistair Overeem in the first round.

And went on to do the same in the final, stopping Arona at 2:54. Although set to an interesting backstory, the real news was Rua himself. At just 23 years old, ‘Shogun’ instantly became the top prospect in MMA, and would live up to his top billing both in Pride and then in the UFC.

The rivalry became less prevalent as time went on, a young Anderson Silva’s acrimonious departure from Chute Boxe. As well as that of Wanderlei Silva to the USA and Thiago Silva to BTT’s breakaway team, American Top Team took some of the heat away.

Later, ‘Shogun’ along with his brother Murilo ‘Ninja’ Rua and the heel of the Sonnen-Wanderlei scrap, Andre ‘Dida’ Amade set up Universidade da Luta, also in Curitiba.

At the same time, Brazilian Top Team were well in the midst of their own implosion. The Nogueira brothers and Mario Sperry both left to start their own camp, and both took key members of the BTT team with them. Paulo Filho’s departure left Murilo Bustamante as the only remaining original member. And the former UFC Middleweight champion remains exclusive leader to this day.

Chute Boxe still exists also, but with their most marketable stars now rookie UFC Bantamweight Thomas Almeida and Invicta’s Cris ‘Cyborg’. It is a shell of its former self. During the glory days of Pride, it was rare not to see representation from the two camps on every show.

A money source that proved irreplaceable, as when Pride began to collapse, Chute Boxe and BTT followed. Though no longer one of the storylines on the lips of the MMA public. This iconic rivalry took place on a legendary stage and for that reason will be remembered forever.