Chris Weidman Wants You In HisTeam

If I told you about a fighter, that had the calm, laid back personality, and striking genius of Ray Longo. The passion for the sport and fans, and ground game of Matt Serra, oh and the accent to match. If I told you the same fighter would be an honest hard-working family man, who not only survived Hurricane Sandy but helped rebuild the other victim’s homes by hand.

And then told you he would have the ability to win the UFC title, whilst beating the best pound for pound fighter on the planet. Then you probably wouldn’t expect the same fighter to be pleading for the fans acceptance and support, especially after his third title defence, and with his third Brazilian legend defeated in a row.

Chris Weidman’s words to the fans after dismantling Vitor Belfort at UFC 187 in the very first round. Though it may have come across slightly in jest, there was a sincerity in what may have been a gentle nudge to the fans to finally accept him.

Chris Weidman has done nothing but performs to an exceedingly high standard inside the octagon. He has a resume that without question secures him as the best 185lb fighter in the world, so why has he struggled so much to get over with the fans?

A Big Fan Of Rashad Evans 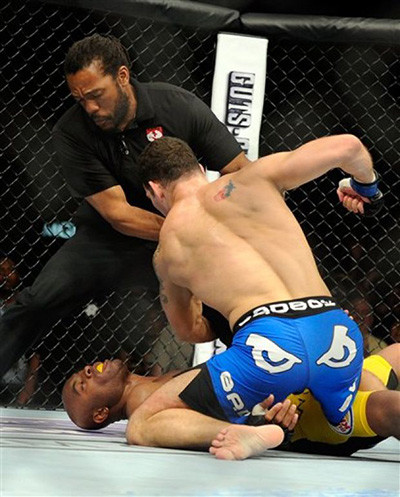 I have always been a big fan of Rashad Evans, and still to this day consider myself that. I will, however, never forget the night that he beat Chuck Liddell.

That night he broke one of the game’s heroes, knocking Liddell out, and receiving an eery silent reception from the crowd. It wasn’t Rashad’s fault, but he had somehow upset the MMA community by simply doing what he was supposed to do.

He had done everything right, but to an army of MMA fans he couldn’t have done something more wrong.

Time heals everything and Rashad’s career wouldn’t be dramatically affected, but even I have to admit, that I couldn’t quite cheer for him with the same intent for some time after. Unfortunately, It’s the same kind of luck that has fallen on Chris Weidman.

Whoever it was that finally beat Anderson Silva. Whoever finally ended the glorious reign of the greatest fighter of all time. That man was going to have to make it up the MMA fans, and prove that he was worth it. Chris Weidman did beat Anderson Silva.

The first time he was accused of getting a fluke win because he caught Silva on the chin whilst he was taunting. And the second contest ended with a freak accident when Anderson broke his leg after Weidman checked a kick. Chris Weidman had beaten the best in the world not once but twice, but people still didn’t accept that he deserved it.

Chris Weidman’s resume before the Anderson fight was already impressive. He entered the UFC with a record of 4-0 and was 9-0 when he fought for the title. He got that spot with UFC victories over Alessio Sakara, Jesse Bongfeldt, Tom Lawler, Damien Maia. And a stunning knockout of the night against Mark Munoz. He has since gone on to have beaten UFC champions Anderson Silva, Lyoto Machida and Vitor Belfort.

It’s not just who he has beaten inside of the octagon that counts. Chris Weidman has proven himself to be a phenomenal athlete, with the cardio to compete at the top level for five rounds. He has shown an immense ability on the ground, to secure position and unleash hellacious ground and pound. His stand up game is brilliant both offensively and defensively.

His offence of constant pressure, knees, elbows, kicks and punches in bunches are stunning. And his defence is among the best in the game. He even attests breaking Silvas leg to training that way of checking kicks specifically.

After watching long time coach Ray Longo break someone’s leg with the same move. He is an all-round athlete, and to top it off, he has proven that he has a chin made of granite for the division.

The good news for Chris Weidman is he has already started to turn the bookies around, being the betting favourite in his last few fights. So it’s safe to say that, at least in their eyes he may no longer be “doubted”. Many expected him to lose to Silva but by the Belfort fight, he was odds on to win. It’s not about the doubt anymore. For Chris Weidman, it’s about acceptance.

We could keep trying to live in the nostalgia of Silvas and Belfort’s, we could keep trying to deny that Chris Weidman is what he is. But there is a danger that if we keep reminiscing about the previous greatest fighter in the world, that we may forget to truly take in, and witness the new one. It really could be time for the MMA world to join the team.