In some ways, it’s hard to believe that it’s been almost four years since Anderson Silva was famously dethroned by an emerging Chris Weidman. However, so much seems to have happened to the once-dominant champion that his reign is beginning to feel like an eternity ago.

Since that unforgettable July 2013 night, Silva has made the walk on just four occasions, officially win-less every time. It’s undeniable that Weidman’s left-hand knockout punch set the wheels in motion for everything that has come after but the twists and turns that ‘The Spider’s story has gone through have still been frankly shocking at times.

No moment in Silva’s decline has been more dramatic though than the horrific climax to the Brazilian’s rematch with Weidman. After a tumultuous opening round, a checked Silva low-kick would result in his leg graphically breaking.

It was a sad sight to see such a great champion left in tears as he clenched his leg in agony. Removing the emotion from the visual, Anderson Silva hadn’t won his title fight rematch and didn’t look like the man that had violently vanquished contenders for so long. Forced out of action due to his injury, many expected that we had seen the last of the iconic Silva.

It seems that Silva never quite saw it that way though as he worked to his recovery and eventual return. Just like every truly great athlete that came before him, Silva had that delusion that’s simply necessary to achieve special things and it carried him to his return fight in January 2015.

His opponent would be the controversial, polarising and enigmatic Nick Diaz. Though tentative at times, Silva would show that he had clawed on to at least some of his skill and trickery as he outscored Diaz for a five-round decision win. Overcome with emotion in his celebration, Anderson Silva had returned against all odds, getting back in the win column too.

However, all of that work would be outdone by a failed drug test that not only changed the fight’s result to a ‘no contest’ but also, rightly or wrongly, called Silva’s whole career into question. With a year suspension halting Silva’s once triumphant comeback, the former champion would eventually return in February 2016, heading to England to take on Michael Bisping.

It was a clash of the longtime contender still vying for a title shot and the former champion desperate to revitalise his struggling career. The fight would gel just as well in the cage too, as the focused Bisping dictated much of the action early, even knocking Silva down. Then, at the end of the 3rd round, controversy struck. 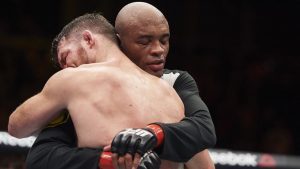 Dispossessed of his mouthpiece, Bisping took his eye off of his foe for a second and it cost him as he was heavily dropped by a jumping Silva knee. Seemingly victorious, Silva wheeled away in celebration as the round’s buzzer sounded.

However, the fight was never officially finished and would controversially continue. Silva would have a couple more moments of flashy brilliance but mostly struggled to get started again, eventually losing a close decision to the heroic Bisping.

In fairness, Silva’s performance would be made to look better by Bisping’s following stunning title win, but it still didn’t change the fact that the former king was still win-less. An injury would delay Silva’s return too, even if not as much as was expected.

A couple of months following Gallbladder surgery and UFC 200 was in disarray following Jon Jones’ drug test failure had left Daniel Cormier opponent-less and the show main event-less. With the promotion in need, Silva stepped in on just one day’s notice, replacing Jones and taking on Cormier.

Suddenly after four fights without a win, zero preparation and a recent injury, Silva was set to fight the Light Heavyweight champion of the world. The fight itself wouldn’t be particularly memorable as Cormier unsurprisingly scored repeated takedowns, controlling Silva comfortably for much of the action.

Wiley as ever, Silva refused to fold though and even hurt the champion with a body kick late in the 3rd round.  That strike wouldn’t be enough to change the inevitable result of a Cormier decision win but Silva left to cheers regardless, mostly due to his courage for even taking the fight.

It was a nice moment that captured a story so often seen in combat sports history. Usually, the flashy fighter is hated at their peak but when the decline begins, opinions change. As a fighter’s skill set is lessened, traditionally his appeal only grows as people are exposed to the heart, grit and courage that they were once blind to.

It’s those attributes that have led to Silva’s return this Saturday night, as he takes on Derek Brunson in another short-notice fight that really only helps the UFC. Either way, we all want to appreciate the greats before they’re gone and Silva is no different. Now at the twilight of his career, we see if ‘The Spider’ can spin his web one last time.

Images courtesy of UFC.com and skysports.com