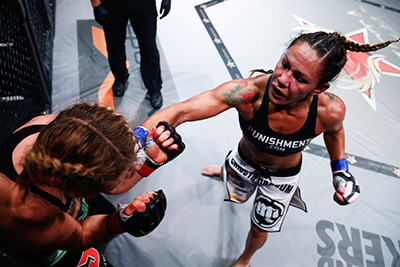 But one thing that can be agreed on is Cris Cyborg’s claim as Women’s MMA answer to the man himself.

Aggressive and skilful with 15 KO’s to her record, she has destroyed nearly everyone in her path. Yet, this will only be her 3rd outing in the Octagon.

There seems to be a strange relationship (or lack thereof) between her and the UFC. UFC seems completely inept at trying to market her in the wake of Ronda Rousey’s likely retirement.

Dana White has even previously blocked her via Instagram (which has since been rectified). Yet here we are less than a week before UFC 214 and how much has her fight been hyped?

“I’m very thankful that he’s given me the opportunity to fight for the belt,” Cyborg said. “For sure he just forgot and he’s probably going to unblock me.”

Obviously, in any other fight card bar, the Jones v DC grudge her chances may have faired a little better. Overall, however, her UFC career as it stands is a mix of bad marketing, bad communication between both sides and absolute PR disasters.

The 145b division was created and made for Cyborg much the same way 135lb was made for Ronda. The USADA violation that never was back in December 2016 blew up in both their faces.

Holly Holm versus Germaine De Randamie was never the plan. GDR not fighting Cris Cyborg is up there with Riddick Bowe not fighting Lennox Lewis, completely farcical!

Another disaster hit when last month when it was announced Cyborg would defend the vacant title against Megan Anderson. Anderson, unfortunately, pulled out citing personal reasons.

This is a real shame, as the bout was highly intriguing. In Anderson’s place steps up Tonya Evinger, the current Invicta Bantamweight Champion.

Whilst Evinger certainly isn’t going there to merely make up the numbers, the likelihood of her stopping the tour de force of Cyborg is unlikely.

Following on from this bout what is apparent is the need for both Cyborg and the UFC to sit down together. Put simply, in a world without household names Cris Cyborg can be a Brock Lesnar-style marketing phenom.

A rescheduled bout with Anderson at MSG would be awesome, should she dispatch of Evinger. Great to finally have you back Cyborg, featherweights beware!