Once upon a time a man named Chris Weidman shocked the world and knocked poor Anderson Silva out cold. Since that moment life hasn’t been the same for the once long time pound for pound king Anderson ‘The Spider’ Silva.

In many ways, it’s a shame this new generation of MMA fans most memorable moment of the man probably ranges from that infamous knock out defeat. The unfortunate leg break in the rematch, or his much anticipated and hyped spectacle of about with the ever charismatic and entertaining Nick Diaz.

And off course there is a major possibility that some will choose to simply remember him solely. For the controversy that came in the wake of the Diaz fight, his failed performance-enhancing drug test. Personally, it’s a hard thing for me to accept that one of my idols had ever cheated. So I’m going to choose to forget about that and hope that a logical explanation someday emerges and puts the whole misunderstanding into perspective.

Prior to Weidman’s knock out of Silva, the middleweight champion seemed invincible. Dazzling opponents with his defensive head movement and footwork. Before knocking them out in the most spectacular of fashions. The closest thing we’re ever likely to see represent poetry in motion in combat sports.

The Spider was a wizard when he stepped inside the octagon and accumulated a montage of highlight-reel finishes. Stunning enough to pass for the most exciting of Hollywood motion picture trailers. 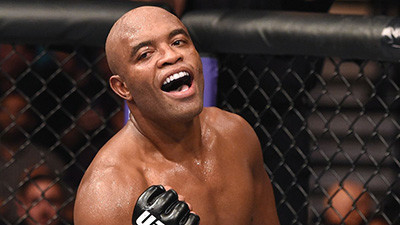 On Saturday night the artist formally known as the champ enters battle again for the first time since his suspension. He will be hoping that an impressive victory against ‘The Count’ Bisping could put him potentially only one more step away from the chance to regain his old middleweight crown.

Rematching Chris Weidman In The Future

With Chris Weidman now likely to rematch Luke Rockhold following Yoel Romero’s drug test failure of his own a gap in the division has emerged. Fellow Brazilians Jacare Souza and Vitor Belfort will face off in an eliminator in May. In a fight that could have massive implications on Anderson’s dreams of fighting again for the title.

We wouldn’t for one moment suggest that Anderson would be cheering against teammate Jacare in that fight. But should Belfort be victorious, a number one contender match with Silva may be on the cards. With no other clear contenders around in what must be regarded as one of the more bleak divisions of the UFC.

Silva Belfort 2 would be huge in Brazil in particular, but also all around the world considering the legendary status of both men. Throw in the reward of a shot at the winner of Rockhold vs Weidman and suddenly there is a lot more at stake than either could have imagined only months ago.

The Greatest MMA Fighter Of All Time

The opportunity to potentially end their long and illustrious careers back on top is one worth giving everything for. This scenario would be elegantly fitting for Anderson Silva in particular. As he is undoubtedly a major front runner when discussing the greatest mixed martial artist of all time.

Some may think it’s a tall ask for Silva at his age to recapture UFC gold. But I believe the more crucial and significant factors to do so the layout of his hands, in the Belfort vs Jacare fight. If Jacare wins he moves forward, and Silva won’t fight teammates. Which would mean the UFC pushing Silva in a different direction.

That direction could still be a rematch with Belfort, but with no title opportunity to fight for, the bout loses some glamour. And the fighters some credibility at this stage of their career.

It could be a special year once again for ‘The Spider’ and I for one wouldn’t put it beyond the man capturing UFC gold by the end of it. But first, he will have to get past a live wire in Bisping on Saturday night. And one would think he has to do so in impressive fashion.