It was November 2004 when Brad ‘One Punch’ Pickett first entered the cage for an MMA fight. Over twelve years later and Pickett is only days removed from the final bout of his career. With his time as a fighter officially in the books, analysts, experts and fans can now look at Pickett’s run in full retrospect.

In years to come I fear that the numbers on Pickett’s record won’t really capture who and what he was though. None of us know how Pickett will be remembered by the wider MMA audience in years to come but I can only share my own perspective, just days after we witnessed the final chapter of his in-cage journey.

From the very first fight of his career, Pickett was a consistent Cage Rage feature for quite some time. Pickett would in fact fight all of his first eight bouts in the UK promotion, winning six before heading to Florida to fight and win in America for the first time.

From there Pickett would fight in multiple promotions, even appearing in Costa Rica and California, winning three of his next five in the process. It was following a 2007 loss to Hideo Tokoro that Pickett really hit his stride though, winning seven straight and capping the run off with a victory that earned the Brit the UCMMA Featherweight title.

With momentum on his side, Pickett would next head to the premier promotion for all fighters under 145lbs: the WEC. His promotional debut would also be his first showing at Bantamweight and it would be a victorious one, as Pickett showed excellent grappling to control opponent Kyle Dietz en route to a highlight reel Peruvian necktie submission finish.

With a WEC win now under his belt, Brad Pickett’s next fight would prove to be a standout one, as he took on then promotional newcomer and now pound for pound kingpin Demetrious ‘Mighty Mouse’ Johnson. Once again, it would be Pickett’s wrestling and grappling that shined as he took down and controlled Johnson consistently for a clear unanimous decision victory.

Whilst it’s fair to say that Johnson wasn’t at the peak of his powers back then, it’s vital that Pickett’s win doesn’t go understated. Even if not as experienced, Johnson was already an excellent fighter and it’s shown since, with only Dominick Cruz beating him in the following seven years.

Few of us knew it at the time but on that night, Pickett had beat a future champion and legend quite comfortably, that should never be forgotten. Disappointingly, ‘One Punch’ was unable to maximise his momentum fully, going 1-1 in his final two WEC bouts, dropping a decision to perennial contender Scott Jorgenson before rebounding with a points win over Ivan Menjivar.

Moving over as part of the promotional merger with the UFC, an injury would delay Pickett’s octagon debut until November 2011, almost a year after his last WEC fight. The eventual debut would take place at home in England, as Pickett took on the then somewhat unheralded Renan Barao.

Motivated by the moment, Pickett was as aggressive as ever and walked forward, desperate to exchange punches. Barao was more than willing too and suddenly we had a wild fire fight. Both men landed heavy shots but it was Barao that eventually came out on top, stunning and dropping Pickett with a ferocious flurry. Pickett was down but not out though and somehow had enough left to prevent the TKO finish.

However, in an attempt to scramble free Pickett gave up his back and Barao took it in an instant, finishing the fight with a rear-naked choke. It had been just over four minutes of back and forth chaos and whilst Pickett had come up short, the combination of his personality and exciting fighting attitude immediately endeared him to the much broader UFC audience.

Pickett’s spot as an elite Bantamweight fighter wasn’t really hurt either, rather Barao’s was greatly heightened and that would become more apparent shortly as the Brazilian soon became the 135lbs champion. Either way, Pickett was back in April, fighting Damacio Page in Stockholm. 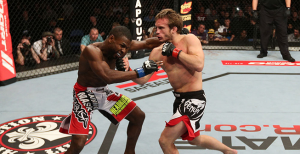 Once again it was a wild affair but Pickett’s well-roundedness would eventually overwhelm Page and the finish came via rear-naked choke in the second round. Next it was back to England again for Pickett as he took on Yves Jabouin in Nottingham. The finish would prove to be a defining one as Pickett scored an unforgettable knockout, closing the show with a lone right uppercut.

Brad Pickett’s win streak would soon come to an end though, as he closed out 2012 with a split decision loss to Eddie Wineland. In 2013, Pickett would go 1-1, outpointing Mike Easton before being submitted by a surging Michael McDonald. Pickett’s inconsistency coupled with the aforementioned ‘Mighty Mouse’s spot as Flyweight champion led to ‘One Punch’ himself making the drop to 125lbs.

That prior win over Johnson made for some intrigue but the stint would end up being a slightly underwhelming one, as he followed up on a win over Neil Seery with two disappointing decision defeats to Ian McCall and Chico Camus respectively. With the hopes for a Johnson title rematch depleted.

Brad Pickett returned to Bantamweight and took on one of the division’s top prospects in Thomas Almeida. With a 19-0 record, the Brazilian looked a tough matchup for the Brit but Pickett had success early, stunning Almeida with crispy boxing combinations. However, Pickett was unable to close the show and payed the price for it, being knocked out by a flying knee under a minute into round two.

In hindsight, Pickett never was able to recapture his early performance in that fight and seemed a less dynamic fighter following it. However, heart and courage was enough to get Pickett back into the win column as he next won a tight decision against Francisco Rivera at home in London.

Unfortunately that would prove to be Brad Pickett’s final career win, as he rounded out 2016 with losses to Iuri Alcantara and Urijah Faber. That defeat to Faber was in fact ‘The California Kid’s farewell fight and Pickett would follow his lead, announcing that his next bout would be his last. That bout would take place this past Saturday night as Pickett took on Marlon Vera at home in London. The walk to the cage seemed genuinely emotional as the Englishman soaked in every moment.

Though he’d have success, the story wouldn’t end as many had hoped, with Pickett being suddenly stopped as the third round neared its end. The loss was a harsh one but the crowd’s response to it was heart-warming. There was a collective respect and admiration, and rightly so. On paper Pickett’s win loss record inside the octagon isn’t a great one but that’s irrelevant in fan’s hearts and minds.

Pickett left that cage to such a wonderful ovation because in a fan base often so divided, ‘One Punch’ almost united us as after all, how couldn’t you love Brad Pickett? Through all of those fight of the nights and memorable moments, Pickett was a brave and honest fighter that always fought with his heart on his sleeve and that’s endearing, always has been and always will be.

Images courtesy of telegraph.co.uk and UFC.com