BJ Penn: A Victim of the Schedule

This Sunday night, one of the greatest fighters in MMA history returns as BJ Penn takes on rising young star Yair Rodriguez in what looks an ill-fated fight night main event. Before I delve into my issues with this fight, I want to make it clear that I immensely respect and admire Penn. We can’t forget how special Penn really was in his prime and the simple fact that special fighters can and often do special things. If Penn indeed does roll back the years and comes out the victor against Rodriguez, it will be an incredible moment but if we’re being honest there’s a reason that most seem to be responding to this matchup with unanimous concern. Analysts, fighters and fans alike all seem to agree that the once great Penn is in danger fighting such a young and dynamic fighter, especially after over two years off.

It’s hard not to stop and ask why Penn, a legend, is in this position anyway. The UFC’s schedule seems to be the clear answer. As spectacular as UFC 205 was to watch live, it almost seems that its after-effects are still felt. Every card since, barring UFC 207, has felt thin and that’s understandable in all honesty. Not only did 205 hold three main event worthy title fights, it also featured stars like Yoel Romero, Chris Weidman, Miesha Tate, Frankie Edgar and Khabib Nurmagomedov on the undercard. It’s hard to argue with the decision to stack the card this way in fairness, it was the first Madison Square Garden show after all. However, the consequences seem to still be prominent, even impacting February’s UFC 208 PPV event, an event that a belt was literally created for in order to insure a title fight main event.

So with the UFC undeniably scrambling for main events in early 2017, enter BJ Penn. One of MMA’s most famous and prominent figures, Penn has been looking to make his comeback for the last year but other factors have delayed it to this point. However, there is more to this comeback than most others in combat sports. Over five years ago, Penn was battered by Nick Diaz and announced his retirement immediately after. He made a good start in the fight but had quickly faded and it seemed that the story of the pioneering legend had come to an end. Penn would return slightly over a year later though to answer the challenge of emerging star Rory MacDonald. As most analysts had expected, Penn was bludgeoned by his much bigger rival and lost once again. 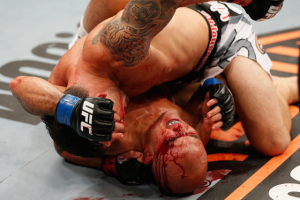 There was no retirement announcement this time but it would be eighteen months until Penn’s next fight when he returned to fight his old conqueror Frankie Edgar for the third time. It would be the former Lightweight champion’s Featherweight debut but most questioned the opponent considering Edgar’s prior two wins over Penn. Those prominent and common concerns would come to life in the worst way when Penn was finished in saddening fashion after a terrible showing. Though his name hadn’t changed, everything else had and Penn was a shell of himself, looking and moving like a different fighter altogether. Once again, Penn retired and this time it seemed over for sure. However, as the rumours of a horror training camp came to light, a return now seemed unfortunately inevitable and it was announced in early 2016.

The first planned opponent for Penn was Dennis Siver, a struggling veteran that would give a good insight into how much Penn truly had left in 2016. And that was what the masses agreed that Penn needed seeing as he hadn’t won since 2010 and was coming off of the awful Edgar fight two years earlier. Siver would pick up an injury before fight night though and was set to be replaced by Cole Miller. However, the fight wouldn’t take place when Penn was flagged for the use of a medically-administered IV and so the ‘Prodigy’s return was once again delayed. It seems that at this point the UFC had lost their patience with Penn and no longer wanted him to get a tune-up fight of sorts, instead matching him with top contender Ricardo Lamas for a main event in October.

Penn would pull out with an injury though, leaving most relieved that the former champion wouldn’t have to fight Lamas in his comeback fight. The hopes that Penn would once again be matched with a less strenuous foe was soon squashed when this upcoming Rodriguez fight was quickly made. Just as they had been prior to 205, the UFC were still in desperate need of viable main events and Penn fit that bill. After the prior delays, giving Penn a more winnable fight wasn’t a priority for the UFC, ratings and ticket sales still were though. I guess that’s all understandable but I still can’t help but feel that this just isn’t right. You could certainly argue that Penn isn’t worth a tune-up at this point and he needs to simply sink or swim in the new era but I feel an exception should be made here.

Penn did a lot for MMA and played a huge part in growing the popularity of the sport and the Lightweight division in particular, yet here he feels more like a sacrificial lamb than a legend. Rodriguez certainly looks a future star and from the outside looking in it seems Penn is here to simply be a stepping stone on that road. It’s imperative that we don’t forget that Penn of course could come out the victor and revitalise his career dramatically. We will soon find the out the truth but I felt it was important to point out some of the factors that have led to Penn’s spot in this main event. For me, it’s undeniable that Penn is an absolute victim of the schedule.

Image courtesy of ufc.com and sherdog.com