As Bernard Hopkins was sent violently plummeting through the ropes as his final fight came to a dramatic close. I’m almost ashamed to say that I was sleeping nonchalantly. Now to be fair, it was around 5 am UK time that Hopkins fought this past Saturday. But in the truth that had never stopped me before.

Bernard Hopkins is undeniably my favourite boxer of all time which may, in fact, explain why I was so reluctant to watch his ‘Final One’. The great fighter had proven me wrong before but this just felt a step too far. Over two years of inactivity coupled with Joe Smith Jr’s youthful aggression and punching power seemed certain to spell an unfortunate end. Fearing what seemed inevitable, I just honestly tried to ignore the fight as it approached, it seemed this story would only end one way.

Now just a couple days removed from the knockout finish. It’s clear that though Hopkins had been finished like so many greats before him, his legacy is and was still strong. With his career now thankfully in the rear-view mirror, it’s important that we celebrate everything that ‘The Executioner’ did in his career spanning 28 years.

Unlike most, in a strange way, the greatness of Hopkins’ career starts at the story’s very beginning. After spending almost five years in prison. Hopkins made his pro debut in 1988, losing a decision to Clinton Mitchell. However, over after a year out of the ring, ‘B-Hop’ returned and would win his next 22 fights. Before his streak eventually came to an end at the hands of emerging superstar Roy Jones Jr.

Though he had fallen short in his first attempt at becoming world champion. Hopkins would eventually claim the IBF Middleweight crown in 1995. Six years later and Hopkins was still the champion, even if his reign hadn’t been filled with marquee wins. It was now or never for Hopkins in 2001 though as he took part in a four-man tournament, involving the other division champions.

With a win over Keith Holmes, Hopkins advanced to the final and claimed the WBC title in the process. Unfortunately, Hopkins’ opponent would be the superb undefeated destroyer Felix ‘Tito’ Trinidad. Most expected the 36-year-old to be outmatched by Trinidad as he surely wasn’t far from a decline. Obscene as it may seem now, Hopkins’ age was a legitimate factor in people’s minds fifteen years ago. 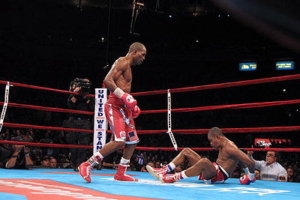 The tragic September 11th attacks would delay the Madison Square Garden fight for two weeks. Making for a quite unique and surreal atmosphere on fight night. As Hopkins entered to boos as his entrance track ‘America the Beautiful’ played proudly. Nonetheless, inside the ring, it was a masterclass from ‘The Executioner’ who surprised many by showing sublime technical skills.

Slowly but surely Hopkins output grew as he began to outclass the great Trinidad. Eventually, with the fight already won on the cards. Hopkins closed the show by dramatically finishing his foe in the twelve and final round. In celebration, the victorious Hopkins dropped to his back. Stopping to take in what he had just done. Against all odds, Bernard Hopkins had climbed the ranks to solidify his spot as a legendary Middleweight champion.

It’s clear now of course that Hopkins’ story was far from finished though as he held the 160 lbs titles for almost four more years. In the end, Hopkins superb title reign would finish when the champion was controversially dethroned by Jermain Taylor via razor-close decision. Hopkins would lose the rematch in a similar fashion and at 40 years of age seemed to be in the twilight of his career.

There was still greatness left in ‘B-Hop’ though, lots of it in fact. The longtime Middleweight champion would next go up to Light Heavyweight and shock many to defeat Antonio Tarver, claiming The Ring title. A loss to Joe Calzaghe under two years later seemed to spell the end for Hopkins. But once again the gritty technician refused to wilt and returned to produce a sublime performance. Dominating Kelly Pavlik to the surprise of almost all analysts.

Time wasn’t on Hopkins’ side though and it seemed unlikely that the now 43-year-old would ever again win a version of the world title. Two years later though and he would get one more chance. Matched with champion Jean Pascal, Hopkins would stun many by seriously troubling his dramatically younger foe. 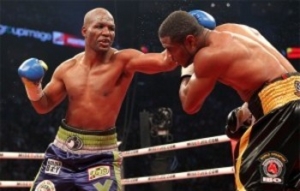 Though he was dropped in both the first and third round. Hopkins was good enough in the second half of the fight to earn a draw and in the eyes of many, deserve a victory. The fight was close enough that an immediate rematch was sanctioned and Hopkins would take the chance with both hands. Clearly outpointing Pascal to become the Light Heavyweight champion.

With the win, Hopkins supplanted George Foreman as the oldest man to win a major title in boxing history. At 46 years of age, Bernard Hopkins was now back on top of the world.

Hopkins’ reigns would be short-lived though as he quickly lost the title to Chad Dawson after a bizarre ‘No Contest’ in their first fight. Inexplicably, Hopkins time as an elite fighter was not yet finished. As he would next become champion again, soundly outscoring Tavoris Cloud. One year later, at the age of 49, Hopkins would incredibly unify his IBF title with the WBA crown by defeating Beibut Shumenov.

Though it seemed at times as though the story would never end. In November 2014 Sergey Kovalev would take Hopkins’ belts, dominating him for a decision win. However, considering his age Hopkins was admirable in his performance against such a feared undefeated champion.

Two years later and the never-ending story has finally finished. Though Hopkins’ career didn’t end in ideal fashion, his legacy and place in boxing history is secure. With longevity unlike anything ever seen before, Hopkins was constantly able to adapt in order to achieve greatness, no matter the odds.

Whether it be the brawling executioner or the slick alien, Bernard Hopkins was simply brilliant and his pursuit of greatness a joy to watch. Though he had lost his last fight just as he had his first, for Bernard Hopkins it was everything in the middle that really counted. So thank you, Bernard Hopkins, for almost thirty years of excellence. Though your story is almost unexplainable on paper, it at times seemed oh so easy for you.