The Future of Irish MMA

The stage was set. Irelands biggest arena welcome Europe’s biggest MMA promotion and they had just joined forces with the second biggest promotion in America for this show. That being BAMMA and Bellator. Being that the show was in Ireland, the card was packed with a lot of great Irish fighters. The crowd was ready, so let’s review the action while concentrating on the Irish lads on the BAMMA card.

Ian Cleary took on Andrew Loftus in his BAMMA debut. You wouldn’t have known it was his first fight on the big stage if they didn’t tell you every 30 seconds. It was back and forth in parts, but Cleary looked confident and was never in real trouble with Loftus. A unanimous decision got the night off on the right foot for the home crowd that was starting to enter the arena. At this point, it was getting about a quarter full, which is a massive change to viewing the opening fights of a UFC card.

We then had Blaine O’Driscoll taking on Neil Ward. Both Irish fighters, O’Driscoll looks to be the real deal and it appeared BAMMA saw the same thing from his first 2 fights (wins) for the promotion. Ward is good but this was his first fight on the big stage, and much like Loftus, it did look to be a jump too much for him. A sold effort put forth against a tough to read O’Driscoll (much like the rugby player of the same surname). As the crowd began moving in in more numbers this fight finished with a decision for O’Driscoll. He handles Ward well and looks to be a prospect for BAMMA.

A Massive Cheer For The Local Lads

Then came big Daddy Kiefer Crosbie! The man named after Jack Bauer (the rumor that he was conceived while his parents watched 24 remain unfounded) name and the Mike Tyson stare. The first massive cheer echoed around the three arenas upon entrance. It was business time. Conor Riordan was the opponent and came in with a grappling pedigree.  But there was no denying Crosbie.

After a feeling-out process, and a brief scare while stuck in a Riordan kneebar that looked tight,  Kiefer went and took care of business with ease. It was fantastic to see. He was confident, prepared, and able to put the lesser experienced fighter away. Surely a contract beckons for Crosbie and a move up the ladder. If this was pro wrestling, he would get the push due to his charisma alone. It will be interesting to see the next move for Big Daddy.

Unfortunately, I missed the Keith McCabe v Richard Kiely fight, I was looking forward to this one but was dragged away. McCabe won in 2 minutes with a KO. Well worth looking for on YouTube. 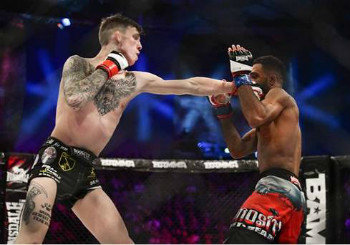 The next Irishman up was Skeletor. Rhys McKee from Ballymena was on a 3 fight win streak and was going for the Lonsdale lightweight title against Jai Herbert, a tough fighter from Wolverhampton. Being in the west midlands a few times myself, everyone there is tough so this wasn’t going to be easy for Skeletor.

But McKee made it look easy. It was one of those times where all the way up to the cage I thought it would be close, maybe go to a decision. But you could see that Herbert didn’t think he could win. It looked like McKee got bigger and stronger for the duration of the 1:46 bout.  It was smooth and much like Crosbie earlier, confident and prepared. McKee took to win and the title back to Norn Iron.

It was a solid night for the Irish at BAMMA 27. The standard of fights was top-notch throughout. For lads who have to balance a work-life, with a fighting life no one was underprepared in any way. It would have been easy for Crosbie to worry while in a deep kneebar during his bout but through repetition and time in the gym, he kept calm and moved on to win. The future really is bright for Irish combat sport and 2017 will be another massive year. Keep your eyes on BAMMA, definitely worth the price of admission every time.

Until next time, @nkeegan for the bants