Artem Levin Interview On His Career And Future

– Can you remember that first moment when the sport of Kickboxing captivated your attention? And how long was it before you realized you wanted to make a career out of it?

The moment I joined the local gym, I knew that kickboxing, but to be more exact, Muay Thai, will take the main place in my life. My brothers kept me focused on the goal that I should be the champion. There’ve been a lot of seconds I thought my choice is probably wrong and it’s not my way.

I could win no competition throughout the first three years. I’ve gone through it with the support of my family. Since that time victories became usual, then I became a professional athlete with titles, belts and money as a proof of success, Muay Thai gave me everything I have.

– In your most recent fight against Simon Marcus you were taken away points for clinching, and then eventually forfeited the match. Can you explain what you were feeling after the points were taken away? And explain what happened when you got back to the locker room with all your coaches. What was said afterwards and what was going through your mind? 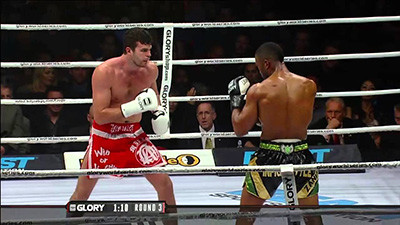 Firstly, there is some misunderstanding about the promotion’s side. Nobody will decline the prejudiced refereeing! I am professional and I can understand the business. Management arranges things the way they can get their champions.

Joe Schilling told this in his recent interview that there are prescriptions for referees, commentators, and judges. As an experienced athlete, I can say that the referee’s job is half of a bout result. He can break an attitude or mindset; he can break a tactical plan for a fight.

I believe it’s obvious to all the fans and audience. But I can say one thing: I’ve never regretted that I went out of the ring. It was the right decision, it attracted the attention of the community, it didn’t become another bout ended with an unfair decision, which will be forgotten in two days.

– What would be ideal kickboxing rules in your opinion? Do you see the ban on clinching and throws from the clinch in Glory a disadvantage?

K-1 rules are good enough. They are good for fans as well as for fighters. It would be spectacular if fast throws were allowed!

–Since recently parting ways with Glory, what are your plans for the future? Are you in talks with any other promotions?

Yes, there are many interesting promotions in Asia. Europe, Russia, Akhmat and ACB are developing. I’ve got many offers. Now I’d like to choose wisely, not to sign the first offered contract.

–Kickboxing is an extremely popular sport worldwide, especially in Europe and Asia. Why don’t you think that it has garnered the same level of popularity in North America, namely the USA?

MMA dominates in the USA currently. UFC is everywhere: TV shows, banners, tournaments, gyms, toys. It’s hard to compete with it. But kickboxing and Muay Thai holds its’ audience if they become interested. If Bellator continues developing the way it currently is, they’ll move the giant. They’ve got their own fanbase, TV, finance and experienced team.

Artem Levin Accomplishing It All

– You have basically accomplished everything there is to accomplish in the sport of Kickboxing, have you ever considered a transition into an MMA career?

I thought about it, but nothing more. I am an all-or-nothing person and realist. If I do anything, I should become the best at it, I should fight for champion belts in the best promotions.

James asks Artem Levin – When fighting around the world, do you notice any differences in how the judges approach the scoring and what they are looking for in your fights? Say Thailand (clinching, trips/sweeps) versus the USA (more boxing/kickboxing orientated)?

Obviously, there are differences and special aspects in every country, but they’re provided beforehand! Thai’s love clinching, the clinch is the main technique; Europe and Russia are egalitarian; everything depends on promotion in the US.

– So many differing opinions. So many different styles. But in your opinion, who is the greatest kickboxer of all time? Now I’m also including Muay Thai fighters in this question. From the smallest guys right up to the great heavyweights? Who is the p4p (pound for pound) greatest?

I’ve got no one answer on it. There are so many outstanding fighters: Ernesto Hoost, Ramon Dekkers, Buakaw Banchamek. I can name ten athletes more. Our sport is too young to say who is the greatest of all time.