While the current Featherweight champion Conor McGregor looks likely to continue his hiatus away from the division, former 155lb champion Anthony Pettis is heading in the opposite direction. Both men are chasing the goal of becoming a two-weight world champion but its Pettis that might have his work cut out for him if recent results are anything to go by.

A little under two years ago and Anthony Pettis had it all, the world at his feet and riding the crest of a wonderful wave of success both inside the octagon and out. But everything can change very quickly at the top of the mixed martial arts world and Anthony has found that out the hard way.

Pettis is currently riding a three-fight losing streak and will enter the octagon on Saturday night in what must be considered the most important fight of his career. There is absolutely no shame in three decision losses to Rafael dos Anjos, Eddie Alvarez and Edson Barboza, but the young Milwaukie native decided he needed a change of scenery and has taken up the route of the 145lb division.

There is an emerging cluster of legit contenders in the featherweight division at the minute and Saturday’s opponent Charles Oliveira is certainly one of them. The Brazilian is on a five-fight win streak if you discard the freak technical loss to Max Holloway a year ago when he injured his neck attempting a takedown in the first round.

Oliveira bounced back from that incident with a very dominant and impressive performance against Miles Jury in December. Submitting the man they call ‘Fury’ via guillotine choke in the very first round, all be it after he missed weight by almost 5lbs the night before.

Making weight could be a very crucial part of this featherweight contest as I feel neither fighter can really afford to miss it. For Oliveira, that would be two strikes in a row and I’d be surprised if he wasn’t sent packing up to 155 with Dana White’s shoe print firmly imprinted on his rear end. And for Pettis, how can he expect us to take him seriously as a contender if he can’t even make the weight, and it won’t be easy.

I expect both the men to have the required level of professionalism to tip the scales at least at 146, possibly the old towel job on both occasions. And should they achieve this it will feel for both that the hard work is over, and that’s something I feel can work to the advantage of Pettis.

In his last couple of fights, Anthony has been far too over hesitant in his approach, a far cry from the man we were used to seeing. The pounding he took at the hands of dos Anjos really took its toll on the former champion psychologically, which ultimately prevented him from executing his usual game against Alvarez and Barboza. 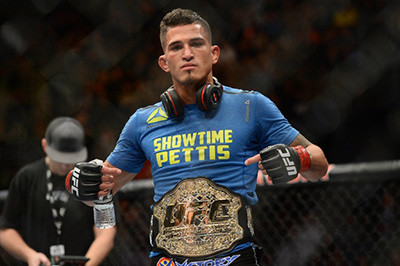 When Anthony Pettis is at his best he is my favourite type of martial artist. A man who is not only inside the octagon to get the win but in the words of the great Bruce Lee is “honestly expressing one’s self”.

And like Bruce says that is something that is very difficult to do, especially when you have a world-class competitor standing across the cage planning to take your head off.

As I said, the biggest difference in this fight to Pettis’ previous fights will be that he will feel like the hard work is done when he steps on the scales and makes that weight. That sense of relief and accomplishment will surely be enough to shake off the shackles of tentativeness that have burdened him so much in recent times.

I’m not a fan of these extreme weight cuts and would prefer it if fighters fought at as close as possible to their natural weight. However, I do see how putting yourself through such an excruciating ordeal can ironically give you an extra boost in terms of a fighter’s mentality entering the octagon.

I feel Anthony will be in a perfect state of mind to go to battle following the weight cut should it be a successful one. And when he is facing off with Oliveira at the official weigh-in ceremony on Friday evening, I’m convinced that there will only be one thought running through his mind, its showtime.