Another week on from the craziest UFC event, that being UFC 202

In between the two, there is a lull in the events. More bad decisions from Holly Holm’s management, mixed with her complete loss of confidence have pushed her outside of the contender’s list for the women’s bantamweight strap. That has been the biggest headline aside from the Lawler v Woodley smash fest that comes up this coming Saturday. I am picking Lawler for that one, I think Condit would beat him and if ‘The Natural Born Killer’ wins his next fight, we will have a rematch.

UFC using the pro wrestling business model here and crossing all of their fingers again. Both fighters win, then the rematch sells itself. They have tried this regularly. They wanted McGregor to beat Diaz and then walk into a super fight (maybe with GSP) at UFC 200. That fell apart due to, it being a sport and no matter what they try, they cannot control anything in the Octagon.

They have been feeding Sage Northcutt a few cans in an attempt to boost his profile and win streak. Sage is too young and too inexperienced to take advantage. As an aside, I think Sage gets far too tough a time. He is young, very talented and is learning every day. If he can get the right people around him he will be top of the sport for years. If he doesn’t then he will keep losing to fighters he should beat.

But enough of that. Let’s start talking about the big one. McGregor v Diaz 2! UFC 202 August 20th in Las Vegas. I am already far too excited. Both camps are making the right noises. Both fighters are saying the right things and we are already on the edge of our seat. 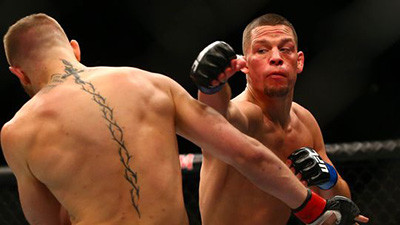 This event will draw more than the 1.2 million PPV buys that UFC 200 did. So with the money taken care of (the 2 fighters should still get more than they are being paid, but they won’t be short a euro afterwards), let’s talk about what will happen.

For Diaz, he is coming in with confidence. He knows he can hurt McGregor and hit him if and when he wants. He knows that on the ground, he is in charge. He went into that fight with a 2-week camp, took a hammering and didn’t take a backwards step.

Seeing his own blood won’t stop Diaz. Hard to see what more he can do. This time he will be sharper, fitter and more confident than before. He is being treated as a start by the UFC which is another positive for him.

Stepping into the McGregor camp is slightly different. Baring in mind that this is coming from the couch and not the actual camp. He is coming in after being dismantled on the ground. Conor knows he can make Nate bleed, but that didn’t help in the last fight. He threw some serious punches that mostly connected and opened up Diaz. But Diaz didn’t move. What does that do to the psyche?

I have been training with monsters that take my best shot and stay upright, it’s a frightening prospect. I know there are talks of better camps and fewer movement coaches, Conor is the better fighter, but it’s all about what happens between the ears.

I am picking McGregor, that is mostly based on my green-tinted glasses, Diaz is a monster, I can’t wait!