MMA is a sport blessed with numerous examples of career comebacks. Matt Serra’s entertaining but largely unsuccessful 4-4 UFC career came to a premature end in 2005 after a loss to Karo Parisyan. But just over a year later Serra was in possession of a title shot after winning The Ultimate Fighter season 4 and would go on to knock out Georges St. Pierre at UFC 69 to cement his legacy.

Frank Mir is another who has experienced similar changes in fortune, although never released by the UFC, Mir’s up and down career saw him go from UFC champion to going 1-2 against Dan Christison, Marcio Cruz and Brandon Vera after his motorcycle accident.

Mir turned it around to become UFC Heavyweight champion again and remains a contender to this day. The most salient career comeback in today’s MMA, however, belongs to Robbie Lawler. The current 170 lb champion was stopped by Pete Spratt, Nick Diaz and Evan Tanner towards the end of his first UFC stint in 2004. Returning 9 years later, a 6-1 run, with the only defeat being a highly contentious loss to Johny Hendricks (which was later avenged), has seen him rise atop the Welterweight division, and be pronounced as the 2014 Fighter of the Year by a multitude of leading media sources.

In the process of following in their footsteps is Belarussian Heavyweight Andrei Arlovski. ‘The Pit Bull’ blazed a trail through the UFC’s Heavyweight division in the early part of the century. After fighting his way into title contention, an injury to the aforementioned Frank Mir would see an opportunity arise to compete for the vacant title belt.

Taking On Tim Sylvia At UFC 51

Arlovski would face off against Tim Sylvia at UFC 51, dropping the Maine-iac early with a right hand before submitting him in just 47 seconds. At just 25 years old, Arlovski was on top of the mountain. And he would solidify his position there later in 2005 with stoppage wins over Pat Miletich student Justin Eilers, and fans favourite Paul Buentello.

Meanwhile, after getting a 3 consecutively back on the win column, Tim Sylvia had re-positioned himself for a shot at Arlovski’s belt. Taking place at UFC 59, ‘The Pit Bull’ set to work with the confidence of a man who had already knocked his opponent out, stalking the 6’8 New Englander with hard shots and his superior footwork.

Arlovski dropped Sylvia midway through the first round, and as he went in for the finish, Sylvia recovered and countered with a short right hand that knocked Arlovski down. Sylvia reigned down with shots until Herb Dean jumped in and stopped the fight, pronouncing Sylvia as the new UFC Heavyweight Champion.

The two met again at UFC 61, With Sylvia again coming out on top in one of the least memorable Championship fights in the history of the Heavyweight division. A 25-minute slow-dance with neither man willing to commit and give the other man a chance to take the lead in the trilogy.

Though Sylvia claimed a unanimous decision, neither man left the Octagon with much credit. Arlovski injured his leg checking a kick early on, but was nonetheless further away from contention than ever, with fans having no desire to see him face Sylvia again.

Arlovski would spin together another three consecutive victories, with stoppage wins over Cesar Gracie black belt Marcio Cruz and the previously undefeated Jake O’Brien sandwiching an impressive result against Fabricio Werdum, although Arlovski’s decision win was marred with criticisms of inactivity and excessive retreating.

Arlovski On Leaving The UFC

Despite compiling a record of 10-4 inside the Octagon, Andrei Arlovski and the UFC parted company in 2008, with Arlovski leaving to chase bigger fights in the division.

Up and coming promotion Affliction would be his destination, and he would be joined there by the stars of the former IFL, as well as prominent former Pride Heavyweights such as Josh Barnett and Fedor Emelianenko. Stoppage wins over former IFL standouts Ben Rothwell and Roy Nelson preluded a now-infamous knockout loss to ‘The Last Emperor’, as Arlovski was caught with a devastating overhand right whilst attempting a knee strike on his fellow Eastern-European.

Though a loss to the consensus greatest Heavyweight in our sport’s history is nothing to be ashamed of, it began a run that nearly put Arlovski’s career at risk. The knockout loss to Fedor was followed up with another knockout loss, this time to Brett Rogers in Strikeforce.

11 months outside the cage and Andrei returned, only to be outclassed by the emerging Antonio ‘Bigfoot’ Silva in a 3 round decision. He would then be entered into the inaugural Strikeforce Heavyweight Grand Prix, where the most violent knockout of all, at the hands of Sergei Kharitonov, would see him fall at the first hurdle.

With everyone from Twitter troll to TV analyst telling Arlovski to retire, the Belarussian moved to the short-lived Pro Elite, where he would string together stoppage wins over Ray Lopez and the vastly experienced Travis Fulton, earning him a 4th date with old rival Tim Sylvia in One FC.

After Arlovski hurt and knocked down Sylvia with a slick combination, he caught Sylvia with two soccer kicks to the head, at the time illegal in One FC’s confusing rules that required verbal clearance from the referee before the technique was used.

Though a no-contest was declared, ‘The Pit Bull’s stock was back up. He would sign for emerging promotion World Series Of Fighting, headlining their debut event with a win over journeyman Devin Cole, following that up with his sole loss in his last 10 against Anthony ‘Rumble’ Johnson and rounding off his time on NBC with a win over Mike Kyle. 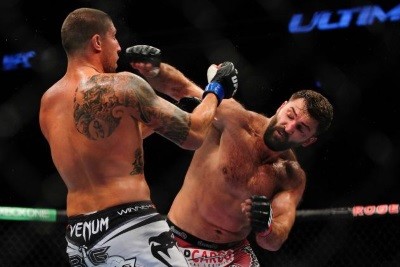 On April the 24th last year, news broke that WSOF had granted Arlovski his release to allow him to make a surprising return to the UFC. In a move that seemed unimaginable at the end of his Strikeforce tenure, ‘The Pit Bull’ would make his second UFC debut at UFC 174 against Brendan Schaub.

Though the fight was largely uneventful, Arlovski claimed the decision win and found himself back in the Heavyweight rankings for the first time in years, earning a rematch with former conqueror Antonio ‘Bigfoot’ Silva in the process.

Arlovski would stop Bigfoot in the first round, with his trademark hard shots, being followed by ground and pound and forcing referee Jerin Valel to intervene. For those of us that really remembered the aftermath of the Kharitonov defeat, and even more so for those of us that saw it live, Andrei Arlovski’s career comeback couldn’t feel more surreal.

Back In The Mix vs Travis Browne

For a long time one of the world’s most prominent 265lb’ers, the Belarussian is really back in the mix at Heavyweight, and a win over Travis Browne next month would propel him toward the top of the division. When brought back last year, Arlovski told MMA Mania that he wasn’t trying to prove himself, saying “At this stage of my career, I’m fighting for myself and anyone who supports me, win or lose.

I want to be a champion again and will work hard to achieve my goals.” And whatever you think of his chances, you can expect it’ll be fun watching him try.