When two Alpha Males fight the World should take notice and that’s what’s happening this coming Saturday! I have a weird idea about fighters and how good they are and what their potential is.

And some will surely find it stupid but indulge me! I often judge a fighter on how many times he has been in danger in a fight! Stupid right? But I can`t help it, it’s a personal flaw that the guys here at Mick’s kindly ignore, so please bear with me.

It is perfectly apt that Chad Mendes hails from team “Alpha Male.” Because when he and José Aldo face off they are the alpha male at their respected camps! Aldo, of course, has been the main man at Nova Uniao for many years.

While people might feel that Bantamweight King TJ Dillashaw or a long-time contender and team founder Uriah Faber might be the top dog. But both have come out recently stating that Mendes is one they feel is there “Alpha Male”.

So, take that they are both the leaders of the two best lighter-weight camps in the World. Then this match will be awesome! Now, throw in the history between camps and fighters, this fight will be insane! Aldo has a chance to avenge friend and teammate Renan Barao`s shock loss to TJ and Mendes has a chance to avenge his only loss ever, to Aldo!

Jose Aldo Has Never been in Danger

Now using my “Logic” let’s look at the two warriors facing off in Rio this weekend and let go back to my weird judging method. As far as I can tell, from watching Jose Aldo for years, he has never been in a dangerous spot in his UFC or WEC career.

Never have we seen a near submission or Knockout scenario. Which is incredible when seeing who he has faced! The closest we`ve seen to Aldo looking human is when he gassed against Mark Hominick after a terrible weight-cut. 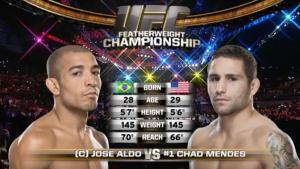 On the other side Mendes! Chad has been stopped, and by the very man, he faces this weekend in a somewhat freak KO. That saw Mendes have Aldo`s back, lose it, and dive for a takedown. Only to find Aldo`s knee waiting for him and it was “lights out”. Aside from this in his whole career, Mendes has, like Aldo never looked beaten or in danger.

Since the Last Fight

Mendes has looked unstoppable, unbeaten when first facing Aldo he was a World-class wrestler. Now he brings a new dynamic to the table. He went back to the drawing board after the first loss and quickly realised that when he hits people they normally fall asleep!

In his 5 fights since the loss, he has 4 KO`s and one beatdown of Nik Lentz. Three of those were first-round demolition jobs, Cody McKenzie, Yaotzin Meza, Darren Elkins all fell this way. Clay Guida was handed his first-ever KO loss by Mendes and Nik Lentz was ragdolled for three rounds by an ill Mendes!

Jose Aldo, on the other hand, has fought three times, beating Frankie Edgar and Ricardo Lamas by decision and the Korean Zombie by Injury. Since there last fight Aldo has not finished a man. I`m not counting the Zombie as that was a dislocated shoulder!

Who knows, but for me, TJ has given team Alpha Male the blueprint on how to beat Aldo, footwork and an over-hand right from hell which Mendes certainly possesses! But how many fighters know how to beat Jose Aldo and yet cannot even put the freak athlete in danger? This fight is intriguing and is a certainty to be all kinds of awesome! I`m throwing my hat in the ring with the underdog but again, what do I know!