As one of the little guys of this world, Ireland has always gotten behind its sports stars. You could cynically call it a symptom of an inferiority complex, and you might be right. We’ve been beaten black and blue from within and without until recent times for the best part of a millennium.

So how cool is it when one of our own has the skill, dedication and genes to make it to the top of their game? Sports in which many have no interest suddenly become crack for the adrenal system. A mate of mine once said he’d watch tiddly-winks if one of the players was in an Irish jersey.

Remember Euro 88. or Italia 90? It was the former that got me into watching football (not having been a particularly sporty person in my formative years), and the latter that had ladies gather with their men, don patriotic makeup and live vicariously through the Boys In Green for ninety or so minutes every match.

Unlike in the humanities, there was never any true begrudgery when a sporting Irish man or woman became internationally recognised. But we are subject to a peculiar, although not unique, condition: we are a small island, which is comprised of two countries. However, our borders are now fully open and we are more aligned economically and culturally than we have been in our past. Having said that, it still leaves us with a bit of a problem: our definition of nationality. Just who is ‘Irish’?

Politically, as we all know, those inside the six counties are British, or more correctly citizens of the United Kingdom (holders of multiple passports notwithstanding). But many still call themselves ‘Irish’ due to our geographical twist. Those who live on the island of Ireland (as defined by ordnance survey) are considered ‘Irish’.

The 1999 amendment to the constitution expressed Ireland as being more of a collection of peoples with a common identity, rather than an actually combined territory. So, we are all Irish, but many still recognise British sovereignty. I’m down with that, especially as it brought peace to the island after decades of useless loss of human life.

One of the best examples of this commonality of cultural identity can be found in Irish rugby union. As we all know, the national team has represented the whole island. The adoption of Ireland’s Call as an all-island anthem was a superb and moving decision. Recent improvements in relations between Ireland and Britain has resulted in the British Lions being renamed to the British and Irish Lions.

There are similar levels of cooperation in tennis, cricket and golf. Things have been trickier for football. Politically it would mean the unification of authorities and leagues under UEFA/FIFA rules, and it looks right now like there are too many who do not wish that to happen. But at least we have a Northern Irish manager. 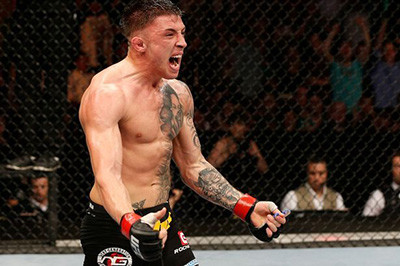 So what of MMA? Well, being a nascent sport, we have a better chance to make it all-inclusive from the get-go. I’ve mostly experienced the positive side of fandom in my 3+ years as a fan. I have to take you back again to that fantastic July 19th last year when Irish and Irish-trained fighters went 6-0.

Norman Parke Gets A Huge Roar From The Irish Crowd

The reception Norman Parke got was superb, and the man reciprocated with a win against a fighter that had a 13-0 streak. This is the difference we make. The roar of appreciation he got shook the house as much as it did for that shown to other fighters from the Republic on the night. It made me so damn proud to be Irish.

However, where there’s a ying, there’s a yang. Cut back to the Conor McGregor vs Jose Aldo presser towards the end of March. Although some of the ‘questions’ offered by Irish fans were mortifying beyond belief, I really liked the atmosphere. McGregor was at his belt-grabbing, gurning adolescent best. Most got off on it; I included. After the presser, there was a fantastic Q&A session with some of Ireland’s best fighters.

Regrettably, half the room had emptied by the time it started. Well, that’s a loss for those that quit. Norman Parke was there, and gave some stirring answers to questions and got the crowd going. Even Dan Hardy got a lot of sympathy from the crowd, many of whom were baying at him to make a return (as an aside, he seems really cool, and I hope he has his medical condition sorted and is able to come back for more face-punching).

But then I noticed two guys standing near me, one of whom was holding a tricolour. One turned to the other and said (I’m paraphrasing): “I’d love to throw this thing up at that fucker.” while indicating the flag and then Norman Parke. I was a little taken aback. It was pretty much my first exposure to what could be considered racism at an MMA-related event. Not only that, but it was also such a sickeningly antiquated attitude.

When It Comes To Sports We Are One

Let it go, guys. Culturally, he’s one of us. I didn’t know why these guys had their opinions but assumed it was down to politics. I am hoping that this attitude is very much in the minority, as most gave him a great reaction. Maybe we need to initiate an anti-racism campaign, just to nip this idiocy in the bud before it gets given a chance to grow.

Imagine if someone had the savvy and funding to be able to monetise an international league-based system. Think of how much more all countries would get behind their fighters. Of course, this is a mere fantasy right now as the guys currently holding the purse strings would never allow it to happen in a million years. Perhaps those not in the larger promotions could participate – I don’t know… I’ll stop the conjecture here, as I’m in danger of going off on a serious tangent!

I would love to be able to cheer for the island of Ireland in a sport that to me has mostly preached tolerance and all-inclusiveness. Couldn’t you imagine, at Croke Park or Windsor Park, thousands passing gargantuan, undulating flags with the faces of fighters from all four provinces from tier to tier and end to end?