It’s almost time for UFC 202 and whether you like him or not Conor McGregor has elevated himself to the pinnacle of his profession. He has done this by putting in the long hours in the gym, nourishing his skill set and perfecting his technique.

His rapid rise to the top has been helped along though by what we like to call here in Ireland, the ‘gift of the gab’. This ability to make people want to listen to him, and furthermore tune into his fights has brought a whole new audience to the Mixed Martial Arts world.

But ironically it’s this brash attitude and supreme confidence that has landed him in what must be an enormous pressure pot awaiting him this Saturday night in Las Vegas. 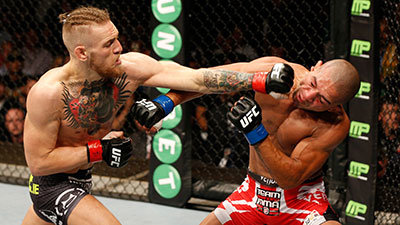 Conor is no stranger to pressure as he has been predicting domination of every opponent he has faced, and to his credit has walked the walk on every occasion. That was until he came up against Nate Diaz at UFC 196.

The proud Stockton native pounced at the opportunity presented to him on ten days notice after Rafael dos Anjos pulled out of his lightweight title defence with McGregor due to injury.

After absorbing some decent shots from Conor, who on the night put a lot of faith in trying to land that trusted left hand, Diaz found himself facing a physically and mentally exhausted McGregor. The Irish man shot for a desperation takedown and Diaz wasted no time controlling his foe.

He executed a couple of beautiful transitions that resulted in a rear-naked choke that can only be described as a thing of beauty.

Has Conor McGregor Got Any Ground Game

Since then people have accused McGregor of having little or no ground game. This is an unfair assessment as Conor is a long term Brazilian Jiu-Jitsu practitioner and holds a respectful brown belt in the art. But it’s a whole different ball game when you are facing someone like Nate Diaz. A long term black belt that has had time to mature and polish on his amazing BJJ skill set.

Now here we are with the rematch upon us and credit must go to Conor for intentionally making the fight even more difficult this second time around. Because that’s exactly what he has done by making this fight at 170lbs again.

Giving a big man like Diaz full preparation in a weight division that is ideal for him to compete against a fighter that usually competes at 145lbs. 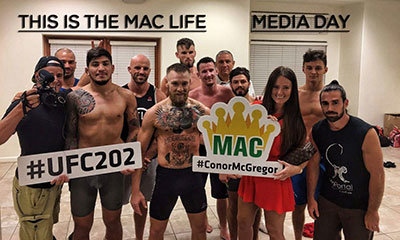 In the build-up, to UFC 196 Diaz questioned Conor McGregor’s training partners and suggested the Irish man would need to be sparring better people in preparation for a fight with him.

Fast forward to today and that’s exactly what McGregor and his team have done. SBG head coach John Kavanagh likes to live by the motto ‘Win or Learn’, and it seems like they have learnt a lot on this occasion.

Time will only tell of course but if McGregor can prove to have adapted in his preparation, surely that adaptation will transform into the fight.

For whatever reason Conor had no fluidity in his movement in the first fight. I expect that to be restored this time around and I also expect McGregor to take advantage of Diaz’ habit of leaving his lead right leg very open.

Chopping Down The Tree That Is Nate Diaz at UFC 202

Conor will want to get chopping at that lead leg as soon as possible as key to his success will be taking away Diaz’ balance. By disturbing his attempts to use his reach and control the distance, McGregor will be in an area where he will feel at his most dangerous. I believe Conor McGregor has in his locker the ability to dominate a fighter like Diaz, and more.

But make no mistake about it, for me, Diaz is the most difficult opponent Conor McGregor has faced. A man that isn’t afraid to lose is a dangerous man, and Nate Diaz fits that bill. In this rare occasion McGregor is facing an opponent were his legendary mind games are non-effective. Nate has used mental warfare throughout his whole career and is more than capable of holding his own in the psychological battle. 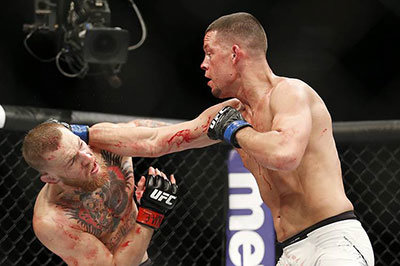 On paper it’s looking very like a 50/50 fight, and what’s at stake for the men is equally as important. A second successive win over McGregor would be massive for Nate, making this easily the biggest fight of his career.

Surely he would then be in a position to challenge for a title and one can only imagine the increase in his fan base.

Another loss for Conor and it puts him in a place where the pull of his brash confidence to a wide audience would be taking a massive hit. But in victory for the notorious one, all of a sudden his reputation is recaptured and heightened.

His public assessment of where he made mistakes and the specific areas in which he needs to improve will only enhance his already adoring fan base, should he pull off his predicted round 2 finish.

Crucially, for the person that Conor McGregor is, victory will be adding even more ammo to his psychological arsenal going forward. It would go a long way in his attempts to resurrect the aura of invincibility that surrounded him.

And knowing the promotion he will probably be immediately restored to his privileged position of choosing his next career move, which I’m sure will have us all as enthralled as ever.